Hex Breaker Jain Lazarus joins the crew of a cursed film, hoping to put to rest what was stirred up before more people die and the film is lost.  Tough, practical Detective Wyatt East becomes her unlikely ally and lover on an adventure fighting zombies, ceremonial magicians, the town wife-beater, the messenger of the gods, and their own pasts.

“You cut off a man’s head, Ms. Lazarus,” Wyatt East said. “I have to ask you questions.”

Jain snuck a look at her watch. Two and a half hours in the interrogation room. Dennis was running out of time. Jain looked up at Wyatt, watching him pace back and forth across the room, and folded her arms on the table. “I understand that, and I’m willing to answer anything, but we need to get to the hospital or Dennis will wind up in the same shape as Mike.”

“Since you’re the one who decapitated Mike, I’m not so sure I should let you near Dennis.”

“If you let me near him fast enough, I won’t need to decapitate him.”

“So you admit that you would?”

“And why would it be necessary?”

“By the time I separated Mike’s head from his body, there wasn’t anything of Mike left. I saw it snuff out. He was completely under his handler’s control. Whoever his handler is.”

“What the hell are you talking about?” Wyatt slammed his palm on the metal desk.

“Detective East, your carefully planned gestures don’t intimidate me. I deal with much more dangerous factions every day than annoyed cops.”

“Maybe you should give me some information about who you really are and what you really do and I won’t be such an annoyed cop.”

The book is temporarily unavailable. Stay tuned for relaunch details from its new home in 2019, and a new media kit! 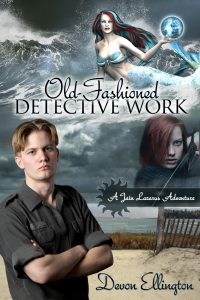 Detective Wyatt East finds himself the primary suspect when hex breaker Jain Lazarus disappears after their romantic weekend in Vermont.  In spite of the suspicions, Jain’s boss, Maitland Stiles, hires Wyatt to track her down, forcing him to face aspects of his own painful past and revealing more about hers.

Saddled with two rebellious runaway paranormal teens, he’s embroiled in a shapeshifter pack disagreement, and must learn to work with both a caustic dragon and a cantankerous mermaid to not only find Jain, but  help her help an old friend who’s in over his head.   Wyatt learns he is not without psychic abilities of his own, although he prefers old-fashioned detective work.

“When did you last see Jain Lazarus?”

“We spent a four day weekend together about six weeks ago in Vermont.”

“Have you spoken to her since?”

“I left a few messages on her voice mail, but I haven’t heard back.”

Wyatt felt a chill run down his spine. “Why would you have her phone?”

“Was she in good health when you parted?”

“We went skiing in the morning. We went back to change. She got a phone call – on the landline, not her cell, and said she had to go. She left before I did.”

“No one’s seen or heard from her since that weekend in Vermont.”

“Are you looking for her?”

“Yes. She was due in our office the very next morning to get briefed on a new assignment. The proprietor of the inn tells a different story.”

“He says the two of you left in the morning, but you came back alone.”

“And there’s no record of a call going through to your room.”

“Did you argue with Jain that weekend?’

“Don’t lie to me, Detective. I’m every bit as capable of discerning a liar as you are.”

“Then you know I’m telling the truth.”

“Either that or you’re even more talented than Jain believed. You are the last person we know who saw Jain before her disappearance.”

This book is temporarily unavailable. Stay tuned for news of the series re-launch from its new home in 2019 and a fresh, new media kit.